Recently Christina and I were returning from a date (actually, we were celebrating our anniversary) when we stumbled upon a catholic pilgrimage. As we headed back home via our normal route we were greeted by THOUSANDS of people walking our way on the main highway. There were literally thousands of people on the highway making it very awkward to drive. The last thing I wanted to do was to hit a pilgrim…anyway, here are some personal thoughts on the event:

Thousands, even millions, recently flocked to the site where “la negrita” sits. The Virgen of Los Angeles 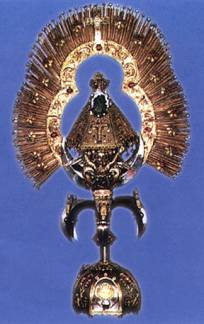 has been embraced by nearly 2 million Ticos (Costa Ricans) this month. Many of them are on a spiritual pilgrimage, walking from the four corners of the country to the Cartago Basilica where the Virgen is held.  Without going into the history of the phenomenon, I would like to think critically about the event. I have read from some devout Evangelicals that these people are wasting their time….they are worshiping idols….they have been led astray etc. While all of that might be true, I think we need to go a little deeper in pondering such an event instead of just rushing to the conclusion that the devil is blinding the masses and leading them to destruction as some Protestant Christians are claiming. I believe events such as this give us insight into the needs of people around us and their need to express their faith through ritual and tradition. Wow, I can’t believe I just admitted that people need ritual and tradition. Is that heretical? I wonder if the modern evangelical church has become so afraid of those two words that we have neglected some of the most basic tenets of humanity and ultimately our faith? I am left wondering where to go from here. How can we move forward, at least within this context, of including the place of authentic spiritual ritual and tradition into orthodox Christianity? I think I’ll chew on that some more…..

One thought on ““La Negrita””

Greg is on faculty at Multnomah University where he teaches and directs the Global Development and Justice (M.A.) program and B.A. program in Global Studies. He is passionate most about bringing together theory and practice in his work around advocating for vulnerable children, poverty alleviation (in its whole sense) and applied participatory research topics. When he's not in the classroom or home, you can find him surfing at his favorite spot on the coast.